The center-piece of my work is the early signs of a Shift to Purpose and Well-being. I first developed this Innovation Wheel (click to view in a separate window) 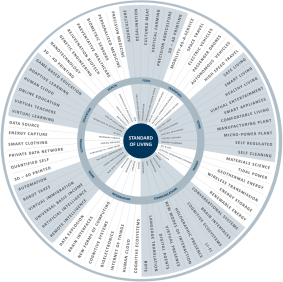 Yogi Berra is credited for once saying that the future ain’t what it used to be. What a perfect way to describe what is coming: a complete change in the way we think about the future. Our journey to the future begins with a look back. A convergence of multiple forces during a special century following the U.S. Civil War established the standard of living in developed economies. Some believe that we will never see a convergence of forces as dramatic and impactful as that which occurred during this period. I pulled this wheel together to capture that convergence across the various areas of our well-being, leveraging the work of economist Robert J. Gordon. I captured his thinking in a recent post titled Revolution and the Innovation Wheel.

END_OF_DOCUMENT_TOKEN_TO_BE_REPLACED

Since the time I completed this post on Disruptive Power and Intersections, it continues to receive attention. It is by far the most effective component of any Future Thinking effort. Given the continued traffic to this two year old post, I am updating with current content. By way of reminder, the anchor emerging futures visual is available via this PDF. An expansion of the science and technology foundation is visualized via this PDF. The visual below connects the intersections of 8 combinatorial scenarios. This is not an exhaustive set of connections; it is strictly intended to describe the scenarios at a high level. This visual can be downloaded via this PDF.