The COVID-19 crisis is fast-moving with information bombarding us in real-time. On this Monday morning, as we awake to more isolation and rising numbers, there is much to consider. In this Article, the author focuses on three economic scenarios: Easter: an optimistic scenario (25% likely) where isolation leads to a slow return to normal by late April; Summer: the main scenario (55%) where improvements begin in mid-summer; and Winter: the pessimistic scenario (20%) where impact lasts into the winter. Given the expansion of isolation through April in the U.S., the optimistic scenario is all but eliminated from consideration. 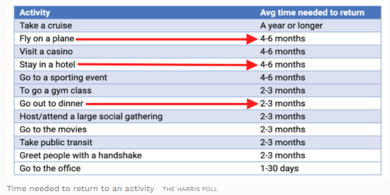 Even when the health side of this story is under control, it will probably take months if not a year or two for the economic side to get back to the level it was before. This Article looks at three industries being decimated by the virus: Airlines, Restaurants, and Hotels. As the article describes, they have all seen dramatic drops in their revenue and no amount of planning or financial reserves can shield them from what is occurring. The article considers how Americans that drive the economy are likely to behave after the health crisis is over.

To measure the impact to the Airline industry, the article looked at a data point showing the magnitude of the drop off; the number of airport travelers the TSA screens.

On Thursday, March 26, there were over 90% fewer screenings done than a year ago. Viewed through a different lens, airports are likely to pull back on capital spend – per Skift the country’s top 50 airports have budgeted about $35 billion in capital spending this year, which will certainty fall. The International Air Transport Association (IATA) estimates 1.1 million flight cancellations by June 30 and a loss in passenger revenue of $252 billion for the year, down 44% for worldwide airlines.

Lastly, restaurants have already been hit hard. The National Restaurant Association  estimates that during the first 22 days of March, the restaurant industry lost an estimated $25 billion in sales and more than 3 million jobs. In the U.S., forty-two of fifty states have banned dine-in service, which is a huge hit to the restaurant industry. Many are trying to generate some revenue by increasing take out service, but this still falls far short of the revenue they had been generating.

I continue to post thoughts on the pandemic, and will continue do so throughout the crisis.

Mid-Pandemic Impact on Supply Chains
Post COVID-19 Economic Recovery Scenarios
Is The Canary Dead?
How Will The Corona Virus Impact Globalization?
The Corona Virus Serves As A Catalyst For Change

Follow Reimagining the Future on WordPress.com
Join 1,316 other followers