It’s been over a year since launching an Online Course focused on a complex and uncertain future. The course takes a Journey through the Looking Glass – a metaphorical expression that means: on the strange side, in the twilight zone, in a strange parallel world. It comes from the Alice and Wonderland literary work of Lewis Carroll, where he explores the strange and mysterious world Alice finds when she steps through a mirror. I have always found this to be a perfect metaphor for our times.

Every time the looking glass has appeared, the world has experienced a Tipping Point. While I firmly believe a tipping point is coming, the impact is likely a question of severity. Some believe that we have survived similar economic transitions in the past, while others disagree:

Yes, we've survived economic transitions before. But not at this scale, and not at this speed – twice as fast and twice as large makes the challenge far greater. pic.twitter.com/uSznqqkENr

Karen Harris is Managing Director, Macro Trends Group, Bain & Company. Clearly, there is much speculation about impact – but I’m not sure many would argue about the speed and size of the coming transition. I continue to believe that many unpredictable forces will conspire to determine eventual impact. I have tried to communicate this phenomenon using a visual that depicts some of the building blocks involved – with new ones emerging every day. The speed at which building blocks combine creates the pace in our environment, which in turn drives uncertainty and complexity. The visual below (Explained Here) describes this dynamic while tracking several building blocks. I update the visual periodically and just made additions to both societal factors and future scenarios. The new future scenarios include: Globalization 3.0, Post-Capitalism, and Autonomous Weapons. 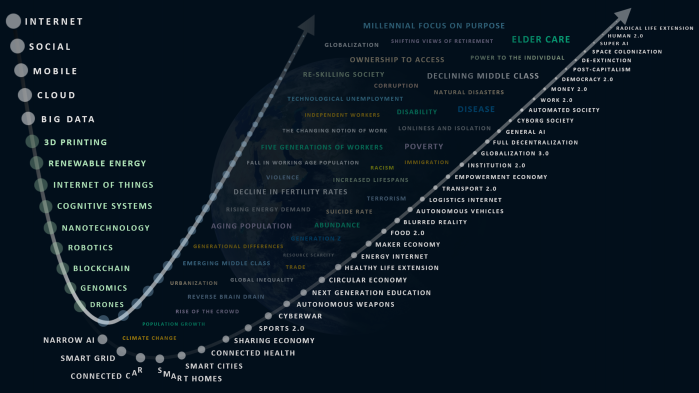 2 thoughts on “The Journey Continues”