Last week, I presented on the future of sports at a fund raiser for the Rutgers University Women’s Soccer team. A local Article on the topic captured the high-level themes, but for those interested, here is the full presentation along with two very good reports I tapped into from Delaware North on the future of sports: The Future of Sports 2016 Report and The Future of Sports 2015 Report.

In addition to the reports, I did my own analysis based on the intersections of science, technology, societal factors, and several emerging future scenarios. Every time I connect a series of dots, it becomes increasingly clear that every sector changes considerably in the coming two decades. As depicted in the visual below, I focused on six major categories within the sports sector:

Here is a summary of each.

How we watch sports changes considerably with expected advances in mixed reality (augmented and virtual). Third venues emerge to create stadium-like experiences with prices that are affordable for families. In addition, the stadium footprint changes, as driverless cars and hyperloop transportation eliminates the need for parking lots. Tailgating moves inside the secured complex, which is now a mega-venue with entertainment options not limited to the game.

An enhanced future athlete via genetic engineering or human-machine convergence may lead to sports segmenting into enhanced and natural leagues. eSports and eXtreme sports alter the sports landscape, while fantasy sports are tightly linked with team and league activity. In the meantime, a move towards global leagues and standards continues, and the crowd plays an active role in sports going forward, including play calling.

This one gets very interesting, as the boundaries between humans and machines blur. An athlete with a bionic limb controlled by their brain likely performs in an enhanced league. The edge in sports therefore increasingly shifts to those traits that make us distinctly human – not unlike the right brain shifts that I described Here. Genetic screening could rear its head sooner rather than later, and performance is maximized through several mechanisms, including gene doping, artificial intelligence, and a wealth of data. Ultimately, a new breed of athlete could emerge in the form of robots, virtual or genetically engineered athletes. This video clip shows that robot athletes may not be science fiction.

The multitude of stakeholders are impacted by a rapidly changing landscape. Teams and leagues will face the emergence of eSports and the popularity of eXtreme sports. Their role is changing in the content space, as athletes and fans decentralize and cut out intermediaries, and crowd sourced decisions play an increasing role going forward. Broadcasters could be the most impacted, as exclusive content agreements come under siege, and a major Internet Company buys the rights to a major sport, taking access to near zero marginal cost. Officials will be disrupted by technology, the Olympics will look very different in the context of the sports involved, and brands will have to shift their sponsorship and advertising strategies. 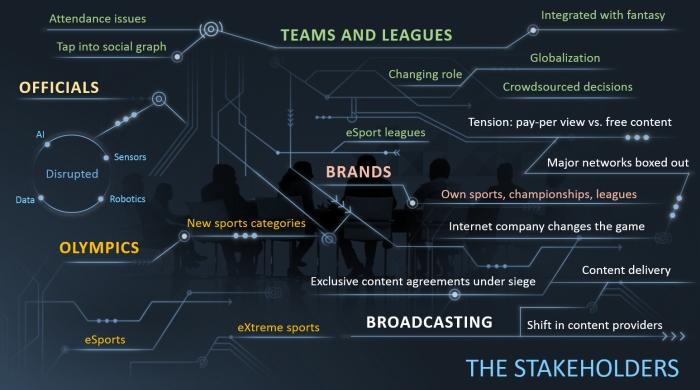 The fan experience undergoes considerable change, as games are seen from the best seat in the stadium, or through the Quarterbacks face mask. The immersive experiences enabled by technology will convert any room into a third venue, complete with holographic replays. Fans will create more content than other stakeholders, taking control of the conversation and effectively blurring the boundaries between them and the media. The media’s role is scrutinized, and fans likely monetize their content through other fans or the media themselves. Fan expectations will continue to rise, mimicking the broader societal shift that saw power move to the individual.

Advances in life sciences will have considerable impact at the human level. Accelerated healing enables athletes to rebound from injury quickly; consider fracture putty that allows a fracture to heal in days. Multiple scenarios converge to improve our collective well-being, with sports as an enabling platform. Game-powered fitness elevates our participation in fitness related activity, as a stationary bike ride turns into a tour of the Grand Canyon. As the body becomes the controller for games, full body immersion in these activities elevates fitness levels. Rapid progress in precision and regenerative medicine enables the extension of healthy lives, and has the potential to extend sport careers.

Every journey through the looking glass leads to fascinating places. These journeys are rehearsals that allow us to see possible futures and position us to shape them – versus being shaped by them. I find the collective wisdom of those that do engage encouraging in the face of what lies ahead. The moderated forum that is currently occurring as part of the Reimagining the Future course is evidence of this. It is through dialog that I believe we move forward on a path that enhances our humanity versus diminishing it.

Follow Reimagining the Future on WordPress.com
Join 1,326 other subscribers