While the 19th Century belonged to the British 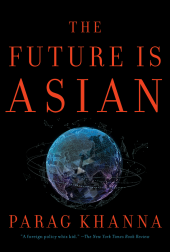 , and the 20th Century to the Americans, Parag Khanna believes the 21st Century belongs to Asia. In his recent book The Future is Asian, the author takes us on a journey to Asia’s past. Along the way, we learn about the historical events that shaped Asia, and the role that the western world played in that shaping.

As Mr. Khanna shifts to the present, we learn about the fascinating stories unfolding across Asia – from all corners of the eastern world. From Saudi Arabia, Africa and Australia, to China, Vietnam, Russia, and Korea. The coming together of Asians as a people is a core theme. The author explores the prominent role that Technocracy played in Singapore, and holds it up as a model to be replicated. He compares and contrasts the progress made in the East, to the dysfunction of the West. As we witness the populist outbreak in the west, we see a coming together in the east. As it does so, the Post-War (One and Two) global order defined by the West gives way to a global order increasingly defined by the East.

END_OF_DOCUMENT_TOKEN_TO_BE_REPLACED

Bloomberg BusinessWeek recently posted an article describing the Global Fertility Crisis. As we look at the forces likely to shape our future, we spend a lot of time and media cycles analyzing the exponential progression of science and technology. 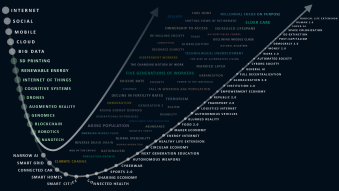 This powerful force is having a profound impact on society. But the opposite is also true: society is influencing the path of innovation. Societal Factors play as big a role in establishing the path of our emerging future. I placed societal factors in the middle of the visual I use to connect an overwhelming number of dots. The two curves that surround them are the science and technology foundation; and the future scenarios that it spawns. Societal tension happens in both directions; out towards the curves, and in from the curves.