This doubling accelerates the path to innovation. With an endless supply of building blocks fueling rapid value-creating combinations, this effect is amplified. While the window to realize value from innovation has shortened, there is a Rising Speed of Technological Adoption. Jeff Desjardins, Editor-in-Chief of Visual Capitalist, had this to say:

In the modern world, through increased connectivity, instant communication, and established infrastructure systems, new ideas and products can spread at speeds never seen before – and this enables a new product to get in the hands of consumers in the blink of an eye. Why do newer technologies get adopted so quickly? It seems partly because modern tech needs less infrastructure in contrast with the water pipes, cable lines, electricity grids, and telephone wires that had to be installed throughout the 20th century. However, it also says something else about today’s consumers – which is that they are connected, fast-acting, and not afraid to adopt the new technologies that can quickly impact their lives for the better.

This visual from Jeff’s article above makes this point very clear. 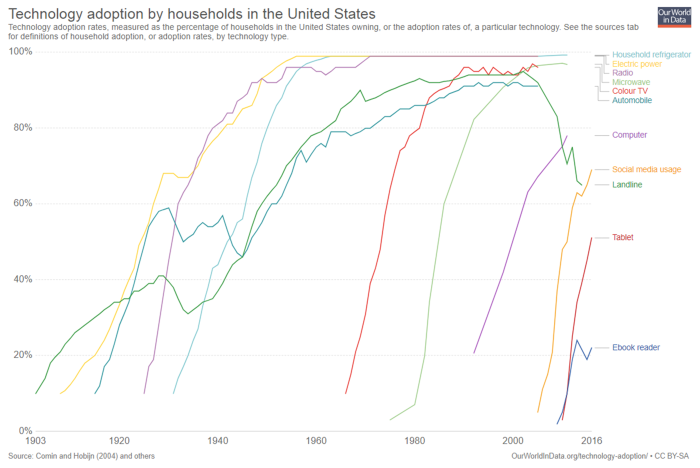 Additionally, as I described in my post on Convergence, advances in one domain can impact and accelerate those of another. It requires the right catalysts to drive that convergence. Today, convergence in the areas of science and technology have a catalyst; the virtuous cycle that is allowing advances to drive exponential progression across both domains. Scientific advances continue to drive our compute paradigm to places that can support an astounding level of innovation. These advances also continue to drive price points down; enabling a democratization of innovation that has historical significance when viewed through the lens of prosperity and equality. Meanwhile, technological advances like artificial intelligence promise to fuel another scientific renaissance.

As highlighted in my post on 2019, three drivers contribute to the acceleration and pace phenomenon; virtuous cycles, building block maturity, and techno-philanthropists. I’ll close by reflecting on them again.

A major factor in the exponential progression of innovation has been and will continue to be virtuous cycles. A virtuous cycle is best described visually, as demonstrated in this short Animated Video developed with Chunka Mui. Mr. Mui uses the driverless car to demonstrate the impact of these cycles, and the impact they have on emerging scenarios. In a Future Thinking context, analysis of these cycles must be part of our Rehearsing, or we will misjudge their timing and short term implications. 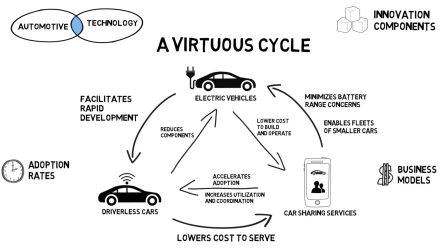 Perhaps the biggest driver of virtuous cycles in the coming year is artificial intelligence. The expansion of our knowledge has always been the key driver of major innovation cycles from our past. As described in a recent post, knowledge is the engine that drives Human Development – and it has been throughout history. Advancements in artificial intelligence during 2019 likely expand our knowledge base, thereby increasing the rate of acceleration. As this recent post from Singularity articulates, AI is likely to move from the confines of more rigid environments to tackle real-world challenges. For example, an algorithm won a competition for predicting how proteins fold, a complex problem at the heart of many biological processes and drug design. This underscores another key factor to consider in 2019: Building block maturity and combinatorial innovation. Expect virtuous cycles to fuel exponential progression in 2109, especially in the areas of science and technology – as advancements in one area fuel progression in the other.

In their now popular book on The Second Machine Age Andrew McAfee and Eric Brynjolfsson describe one of the forces behind our accelerating pace. This force could be key to understanding the dynamics of our environment; the number of potentially valuable building blocks is exploding around the world, and the possibilities are multiplying like never before. Take for example the perspective provided by Author Kai-Fu Lee in his recent book titled AI Super Powers. He describes a maturity in artificial intelligence that shifts us from research to implementation. As a maturing building block, expect a number of AI-enabled use cases to emerge in the coming year. 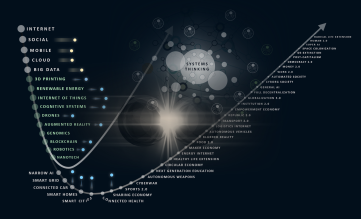 With increasing maturity, expect the Rapid Connection of Dots in this very complex system in 2019.

Techno-Philanthropists as a driver of acceleration. I posted a great example recently that described how a group of billionaires pledged one billion dollars to fund radical new energy technologies. Breakthrough Energy Ventures (BEV) is an investment fund that aims to accelerate energy innovation and disrupt the energy industry. This Bill Gates brainchild managed to secure a host of high-profile investors, including Jeff Bezos, Richard Branson, Jack Ma, and Michael Bloomberg – and they’ve just announced their First Seven Investments. As the world’s techno-philanthropists focus their wealth in these key places, acceleration follows. Expect more of this in 2019.