Skip to content
HomeImmigration, Innovation and the Coming Migrations 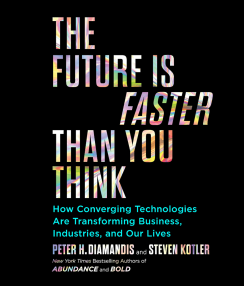 I recently added a new book to my Book Library. Authors Peter Diamandis and Steven Kotler explore the acceleration of technology and the Upheaval we are likely to experience in the coming decade. Diamandis and Kotler investigate how exponentially accelerating technologies converge and impact both our lives and society as a whole. They ask key questions like: how will these convergences transform today’s legacy industries? What will happen to the way we raise our kids, govern our nations, and care for our planet?

There is a plethora of information contained in the book – a must read for anyone focused on the future. I will write about critical themes over the next several months; starting with this post on migration. In a chapter dedicated to the five migrations that may occur in the future, the authors start with a look at history. They explored the policies that alter the flow of highly skilled immigrants and their affect on science and innovation. The conclusion: migration is an innovation accelerant. They found that companies with high-skilled foreigners saw an increase in both their rates of innovation and the impact those innovations had on the market: A 10 percent rise in skilled foreigners on the payroll led to a 2 percent increase in product reallocation.

In a finding that is topical given the rise of nationalist sentiment,  the authors found that although much has been said about immigrants taking work away from citizens, the data shows the opposite. Rather than stealing jobs, they are far more likely to create new ones. Aside from the political debates of our times, migration itself will continue to dominate the dialog. There have been many migrations in the past. By the numbers, the three biggest forced migrations were: 12 million Africans were uprooted by the slave trade, 18 million people were rerouted by the division of India and Pakistan, and 20 million were rearranged in Europe in the years following World War II.

What are the some of the historical reasons for migration? Seeking economic opportunity and escaping oppression and disasters are common ones. Several historical events drove other migrations: drought drove us out of Africa some seventy thousand years ago and is still driving us today. Forced migrations like the 1947 partitioning of India and Pakistan is considered the greatest forced migration in history. Policies drove other migrations. When Adolph Hitler passed the law for the restoration of the professional civil service – which banned all “non-Aryans” from government employment – more than 133,000 German Jews fled for America over the next decade. This specific migration served as an innovation  accelerant in the period 1920-1970.

Aside from the traditional reasons for migration, what are the future reasons? The book focuses on five major migrations this century: climate migrations, urban relocation, physical to virtual worlds, space migration, and singular consciousness to collective consciousness. Climate migration alone – even on the low end of the prediction spectrum – displaces 130 million people. That’s a global reshuffling seven times larger than anything seen before.

Aside from urban relocation, the others explore crossing borders we’ve never crossed before. Moving off world and into outer space; moving out of regular reality and into virtual reality; moving from individual consciousness and into a collective consciousness enabled by brain-computer-interfaces.

The book takes a fascinating look at convergence, acceleration, and the complete reimagining of everything. I highly recommend the read.

2 thoughts on “Immigration, Innovation and the Coming Migrations”