Societal factors are one area of Convergence that is shaping our future. The accelerating progression of science and technology gets a lot of attention, but our various societal issues are a major part of the story. For example, there have been various projections for global population growth during this century. Early projections had the globe exceeding 11 billion people by the close of the century (the world is currently at about 7.8 billion people). The number of people on earth – and where those people live – will have profound implications.

In a recent Article, author Doyle Rice explores this topic. Mr. Rice describes how Both the U.S. and world populations are forecast to shrink by the end of the century, causing major shifts in global economic power. Dr. Richard Horton, editor in chief of the British Journal The Lancet, which published a recent study on the topic, said this:

“The 21st century will see a revolution in the story of our human civilization, Africa and the Arab world will shape our future, while Europe and Asia will recede in their influence. Here are key insights from the study:

The U.S. population is projected to grow until just after midcentury (364 million people in 2062), followed by a decline of less than 10% to 336 million by 2100, according to the study. A contributing factor is one of the factors in the visual below: a decline in fertility rates. The fertility rate represents the average number of children a woman delivers over her lifetime. The U.S rate is predicted to steadily decline from 1.8 in 2017 to 1.5 in 2100. This is well below the 2.1 replacement rate; the rate necessary to maintain existing population levels long term without immigration.

Another critical factor on the visual below is the fall in working age population. This is a complex topic influenced by the definition of work in the future. Current projections say that by 2100, the U.S. will have the fourth-largest working-age population in the world (around 181 million), with immigration likely sustaining the U.S. workforce (India, Nigeria and China round out the top three). Although researchers warn that a U.S. immigration backlash threatens sustained population and economic growth, that view is taken in isolation. What if we highly automated jobs and radically changed the role of work in society? Do we have the opposite problem; no jobs? That’s the danger of viewing these factors in isolation, versus connecting the dots that appear across the system – see Visual.

Instead of 11 billion plus people in the world by 2100, the study projects a world population that peaks in 2064 at around 9.7 billion, and then declines to about 8.8 billion by 2100. At that point, the world’s four most populous countries are predicted to be India, Nigeria, China and the U.S. The study indicates that Sub-Saharan Africa is likely to become an increasingly powerful region on the geopolitical stage as its population rises. Nigeria is projected to to see its working-age population grow over the course of the century, from 86 million in 2017 to 458 million in 2100 (the only country among the world’s 10 most populated nations to do so).

Populations in Asia and Europe are expected to shrink. Given the issues surrounding fertility rates, policies embraced by these societies are critical to economic growth. These studies provide an opportunity to reimagine our policies and to address the challenges presented by demographic change. 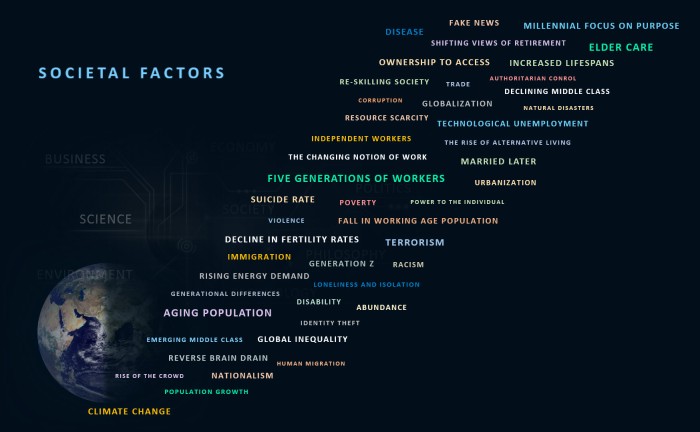 One thought on “The Future Impact Of Societal Factors”