I wrapped up another great book. This one focused on government deficits as viewed through the lens of Modern Monetary Theory. Author Stephanie Kelton addresses the topic in her recent book titled The Deficit Myth. In this best seller, Ms. Kelton – Professor of Economics and Public Policy at Stony Brook University – explores the role of currency issuers (U.S., Japan, U.K., Australia, etc.) versus currency users. From the book:

“The distinction between currency users and the currency issuer lies at the heart of Modern Monetary Theory. And as we will see in the pages ahead, it has profound implications for some of the most important policy debates of our time, such as health care, climate change, Social Security, international trade, and inequality.”

At the heart of the theory lies monetary sovereignty: a country issues its own nonconvertible (fiat) currency and only borrows in its own currency. 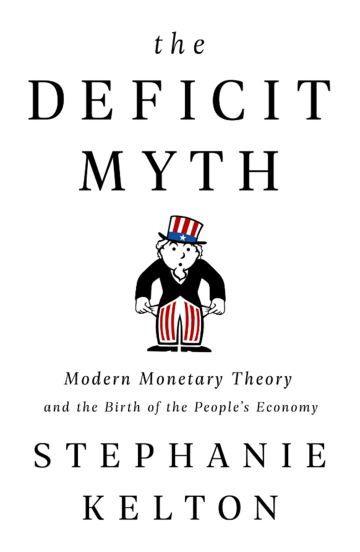 It espouses that conventional thinking is flawed; the belief that government relies on two sources of funding: taxes and borrowing. This belief leads to two polarized positions in deficit management: raise revenue (taxes) or cut government spending. But modern monetary theory (MMT) states that governments do not need our money, have no reason to borrow, and no need to cut spending (unless inflationary pressures dictate). The key is the relationship between issuing currency, managing inflation, and managing resource constraints.

I really appreciated Ms. Kelton’s focus on deficits outside of the fiscal domain. She calls them the deficits that matter: the good jobs deficit, the savings deficit, the healthcare deficit, the education deficit, the infrastructure deficit, the climate deficit, and the democracy deficit. It is a wonderful way to view our societal challenges – packed with supporting detail. The MMT bottom line is quite simple: we should not be constrained by affordability, because we can never run out of money. With that guiding principle in place, we are left to manage inflation and the resource constraints that may hold us back.

The book closes by getting prescriptive. MMT believes in a federal job guarantee that would eliminate uncertainty by establishing a universal right of employment to all.  Here is how economists see it working:

“Instead of leaving millions jobless, the government would establish an open-ended commitment to provide job seekers with access to the currency in exchange for performing public service work. Participation would be purely voluntary. No one is required to work in the program. To ensure that we’re not just creating make-work jobs but good jobs, MMT economists have recommended that these jobs pay a living wage and that the work itself should serve a useful public purpose.”

Our biggest challenge as humans is to allow ourselves to think differently. One of the future scenarios tracked on My Visual is Money 2.0. It likely manifests itself in several ways: Digital Currency and possible shifts in global reserve currency; new mental models (i.e., MMT); and reimagining how society views value. This book challenges conventional wisdom and requires us to think differently. So, into my Book Library goes The Deficit Myth; I highly recommend it.

One thought on “The Deficit Myth”