This recent Article focuses on the failure of MBA programs to prepare leaders and innovators to cope with a fast-changing world: leaders that can put the long-term health of their company and customers first. Here is the bottom line straight from the article:

Far from empowering business, MBA education has fostered the sort of short-term, balance-sheet-oriented thinking that is threatening the economic competitiveness of the country as a whole. If you wonder why most businesses still think of shareholders as their main priority or treat skilled labor as a cost rather than an asset – or why 80 percent of CEOs surveyed in one study said they’d pass up making an investment that would fuel a decade’s worth of innovation if it meant they’d miss a quarter of earnings results – it’s because that’s exactly what they are being educated to do

That’s paramount to suicide in an emerging world that requires an enabling innovation portfolio and an ability to address the rapid shifts likely to occur. The author states that many iconic American business leaders believe an MBA degree makes you less equipped to run a business well for the long term, particularly in high-growth, innovation-driven industries that depend on leaders who are willing to invest in the future.

Author Rana Foroohar describes a world where MBAs are everywhere except industries that tend to be the most successful: Silicon Valley is relatively light on MBAs and heavy on engineers. She also states that MBAs had almost nothing to do with the two major developments in the American business landscape over the last forty years: the quality revolution in manufacturing and the digital revolution. Although the number of MBAs graduating from American business schools has jumped since the 1980s, the health of American business has decreased over that time by many metrics: corporate R&D spending, new business creation, productivity, and the level of public trust in business.

Foroohar believes the challenge is to teach our future business leaders how to be curious, humane, and moral; how to think outside the box about problems like funding the research for a new blockbuster drug. And how to be strong enough to stand up to Wall Street when it demands the opposite.

I would say that  our education and learning paradigms have many challenges, stated so eloquently by Alvin Tofler in his book, Rethinking the Future: 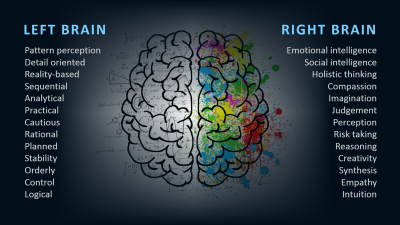 “The illiterate of the 21st century will not be those that can’t read or write, but those who cannot learn, unlearn, and relearn”

We can broaden this discussion to encompass all aspects of learning and education. The nurturing of our right brain characteristics and a general movement away from left-brain dominance. This shift leads to a very different Future Capability Profile, one that is critical for success in our emerging future. 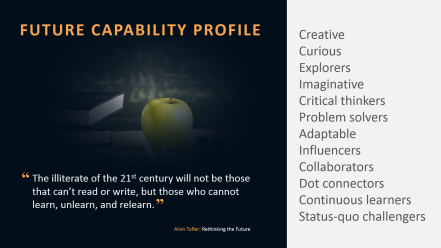 This phenomenon is not limited to just a handful of current industries, but instead will permeate and impact every organization, as value creation and capture increasingly involves multiple stakeholders, and shifts to an Ecosystem structure.

Other interesting thoughts from the article are highlighted below:

The markets tend to brutalize firms for long-term investment and reward them for short-term paybacks to investors. Business schools by and large teach an extremely limited notion of “value,” and of who corporate stakeholders are

Only half of all MBA programs make ethics a required course, and only 6 percent deal with issues of sustainability in their core curriculum, despite the fact that a large body of research shows that firms that focus on these issues actually have higher longer-term performance. Instead, students are taught that what matters most is maximizing profits and bolstering a company’s share price. It’s something they carry straight with them to corporate America.

The greatest percentage of those who receive an MBA degree end up not in industry, but in some area of finance. Although figures have dropped somewhat since the financial crisis of 2008, the financial conglomerate – banking, insurance, hedge funds, investment management, and consulting firms – is still the largest single block of MBA employers, along with the accounting and finance departments of Fortune 500 companies.