The next focus area in this closer look at transformation is the fifth and perhaps most critical forcing function: societal change. Wikipedia refers to societal change as an alteration in the social order of a society, including changes in nature, social institutions, social behaviors, or social relations. The base of such change is change in the thought process of humans. Digital is the primary driver of a societal change not seen since the first industrial revolution, impacting every aspect of society from business to war. It was digital (Internet) that accelerated globalization, and now the broader digital platform allows even a start-up to be global upon inception. 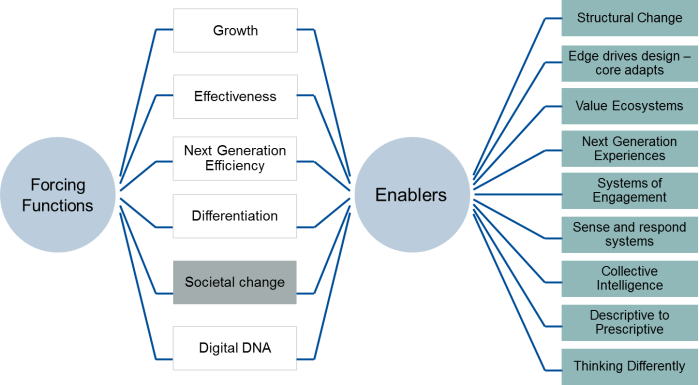 We’ve seen the collapse of dictatorships enabled by social networking, the birth of a generation that only knows digital, and a fundamental shift in power from business to consumer. Some of the primary drivers of this forcing function are:

It all starts with being connected, and never before has a communication medium been adopted as quickly or as widely as social media. We’ve all seen the numbers associated with Facebook, Twitter and others, but those numbers distract us from the true impact that social will ultimately have. This impact will be felt on two levels, as social shifts to the business world (social business as many call it), and at the same time drives more societal change by moving to its next phase. The next phase of social has been called the collaborative or sharing economy. This collaborative economy leads to potential revenue loss, as customers share products and services with each other. The impact reaches beyond the private sector, as bartering could have significant impact on Government tax revenues. You can read more about the evolution of social in this Altimeter report titled The Collaborative Economy.

Not to be outdone, mobile is a societal game changer, eventually enabling billions of new consumers to enter the digital economy. Everything digital is going mobile, as it shifts from a device to a platform. Mobile innovation is being driven by consumers and employees, effectively reversing the direction of innovation which historically started with large business and Government. Bring your own device (BYOD) is but one manifestation of this phenomenon. It is hard to underplay the broad societal impact of mobile as it is destined to change our business operations forever.

Digital has changed an entire generation (Generation Y or Millennial), which knows no other way to operate. Members of this generation were born between 1980 and 2000, and they are projected to make up 36 percent of the U.S. workforce by 2014, and nearly half by 2020. By 2030, the millennial generation is projected to make up 75 percent of the global workforce. Much has been written about the tendencies of this generation, and they will clearly have a big impact on many business practices. However, I believe we tend to overplay this impact and ignore the issues associated with the other three generations. Yes for the first time in history, our workforce consists of four generations of workers, and by 2020, there will be five generations. These generations are:

If truth be told, as we look at this multi-generational workforce, the enterprise has more digital immigrants than digital natives and companies are challenged to deal with that fact. So this is about more than creating an environment that incents the millennial generation to join our company. We have to deal with issues like having an entire middle management layer that could be ill equipped to operate in the future environment. We must address the fact that a growing base of technology-savvy employees is challenging traditional views of Enterprise IT. In addition, in today’s workforce, contract workers are the new dynamic group to watch for. These perpetual freelancers could very well be the creative engine behind many of our initiatives. Evidence of this growing trend can be found in analyzing workers that file their taxes under 1099 forms. In 2012, a whopping 92.6 million 1099 forms were filed in the U.S., up from 80 million in 2010.

Now let’s consider societal changes in the way we view work. The virtualization of work continues to change our traditional view of the workplace. Yahoo aside, having an office or “going to work” does not mean the same thing that it did a decade ago. As systems of engagement mature, they allow us to use a distributed workforce; much like the movie industry uses an assembled crew. You can start to see the early seeds of this phenomenon in the crowdsourcing of product design, ideation, and any number of enterprise functions. As this plays out over time, the perpetual freelancer will play an increasingly important role within the value ecosystem. Our very view of what it means to be an employee could change dramatically over time. Coupled with the broader movement towards value ecosystems, the implications to the way we manage tasks or projects can be profound.

The challenge does not lie with employees alone, as our connected world with its openness, access and transparency has shifted the power to the individual. Yet many companies still hold onto their traditional view of digital as a marketing issue and fail to grasp the enormity of this societal change. Our customers have shifted, and we can’t shift with them if we are inhibited by traditional views of digital. This societal change drives the enterprise to place the customer at the center, and this will have far reaching implications to business as we know it.

Here are some of the initiatives and tactics that increasingly support programs to deal with societal change:

That wraps up this look at societal change as a forcing function. The goal once again is to identify those compelling reasons for a company to embark on a transformational journey, even if it is not currently clear why you would do so. Traditional approaches to determining where to invest will not work in the face of the biggest transformative period in history.

To summarize to date, here is a link to each of the previous posts on forcing functions:

3 thoughts on “A Closer Look at Transformation: Societal Change”