With the start of a new year, the traditional focus on predictions has begun. Prognosticators do so at their own peril – as this New Yorker Article clearly articulates. It seems that in 1968,  the Foreign Policy Association (formed in 1918 to promote the League of Nations), celebrated its fiftieth anniversary by publishing a book of predictions about what the world would look like in fifty years. Well, here we are fifty years later, and if history is any guide, futurists have very little credibility. Although predictions these days may be even more difficult given our complex systems are progressing and scaling at an unprecedented rate, a macro-level focus can provide an ability to scan beyond the horizon. So rather than attempt to predict, here are my 2019 thoughts on several macro-level forces.

When forces converge across several domains, the world has experienced a Tipping Point. As I described in a recent post on Learning from History, the point in history that experienced the most convergence occurred in the late 19th and early 20th century.

This remains the most impactful period in human history. I believe we could eclipse that in the coming decades.

This convergence occurs between the economy, society, technology, science, business, environment, politics, and others. Periods that experience profound levels of convergence require Unlearning – one of the most difficult things for humans to do. Imagine life after the civil war and how much unlearning was required in the fifty plus years that followed.

Now consider the possibility of increased convergence in the coming decades. What core beliefs, intuitions, and institutions will we need to reimagine? Consider ethics for example. In this era of artificial intelligence and robots, programming ethics into the fabric of an automated society will be critical – a dialog that I expect to ramp in 2019. A great example of this process in action can be seen in the MIT work around A Moral Machine.

One of the biggest convergence factors for 2019 is geopolitics. How the year progresses in this area could have considerable impact on our possible futures. The first macro-level force to consider in 2019 is therefore convergence.

Much has been said about the exponential pace of innovation. I expect that 2019 is likely to experience more acceleration across several fronts. The drivers of this acceleration are: virtuous cycles, building block maturity, and techno-philanthropists.

A major factor in the exponential progression of innovation has been and will continue to be virtuous cycles. A virtuous cycle is best described visually, as demonstrated in this short Animated Video developed with Chunka Mui. Mr. Mui uses the driverless car to demonstrate the impact of these cycles, and the impact they have on emerging scenarios. In a Future Thinking context, analysis of these cycles must be part of our Rehearsing, or we will misjudge the timing of scenarios and their short term implications.

Perhaps the biggest driver of virtuous cycles in the coming year is artificial intelligence. The expansion of our knowledge has always been the key driver of major innovation cycles from our past. As described in a recent post, knowledge is the engine that drives Human Development – and it has been throughout history. Advancements in artificial intelligence during 2019 likely expand our knowledge base, thereby increasing the rate of acceleration. As this recent post from Singularity articulates, AI is likely to move from the confines of more rigid environments to tackle real-world challenges. For example, an algorithm won a competition for predicting how proteins fold, a complex problem at the heart of many biological processes and drug design. This underscores another key factor to consider in 2019: Building block maturity and combinatorial innovation. Expect virtuous cycles to fuel exponential progression in 2019, especially in the areas of science and technology – as advancements in one area fuel progression in the other.

In their now popular book on The Second Machine Age Andrew McAfee and Eric Brynjolfsson describe one of the forces behind our accelerating pace. This force could be key to understanding the dynamics of our environment; the number of potentially valuable building blocks is exploding around the world, and the possibilities are multiplying like never before. Take for example the perspective provided by Author Kai-Fu Lee in his recent book titled AI Super Powers. He describes a maturity in artificial intelligence that shifts us from research to implementation. As a maturing building block, expect a number of AI-enabled use cases to emerge in the coming year. 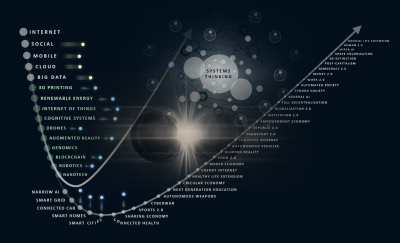 Techno-Philanthropists as a driver of acceleration. I posted a great example recently that described how a group of billionaires pledged one billion dollars to fund radical new energy technologies. Breakthrough Energy Ventures (BEV) is an investment fund that aims to accelerate energy innovation and disrupt the energy industry. This Bill Gates brainchild managed to secure a host of high-profile investors, including Jeff Bezos, Richard Branson, Jack Ma, and Michael Bloomberg – and they’ve just announced their First Seven Investments. As the world’s techno-philanthropists focus their wealth in these key places, acceleration follows. Expect more of this in 2019. The second macro-level force to consider in 2019 is therefore acceleration.

As we enter 2019, I expect a year of exploration, with a number of convergence-related challenges. As the maturing building blocks combine to expose possibilities, how will we respond? If you want to take a look at possible futures in the year 2039, this Article from PC Magazine should do the trick.